Professor Simon James, of Durham University, has spent the past year looking at creativity in education ahead of a major national report, as David Whetstone explains. 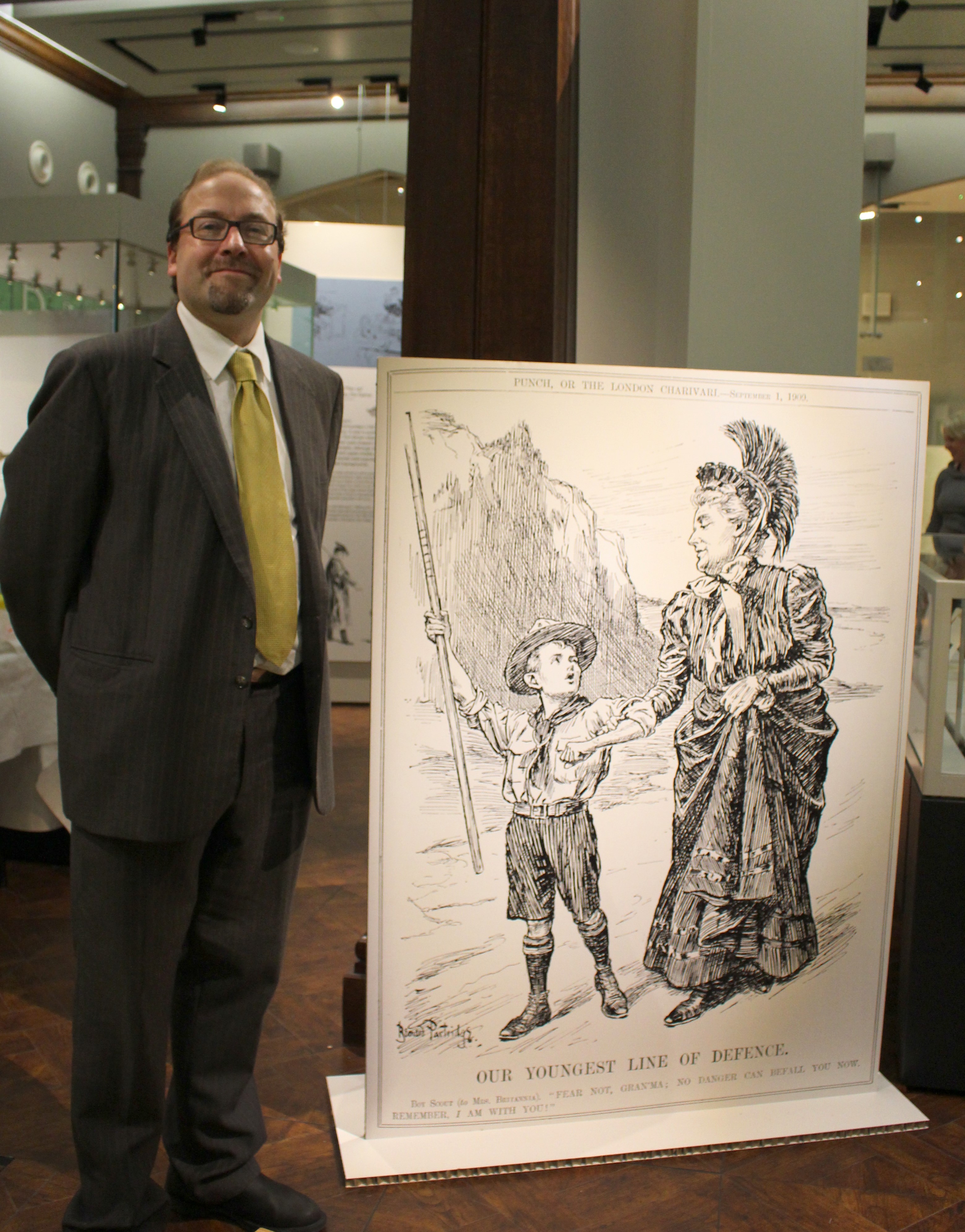 The man who speaks for Durham University on the North East Culture Partnership’s universities sub-group is “presently on research leave”, according to his emails.

It’s no kind of holiday, though. On a sunny day with Durham’s streets full of people and boats on the river, Prof Simon James is at his computer flanked by documents stacked in precarious piles.

Before we’re too deeply into autumn, much of this material will have been distilled into a report which Simon says the schools minister and the secretary of state for education have at least promised to read.

Whether they act on its recommendations – or even will be around to do so – remains to be seen.

The Durham Commission on Creativity and Education is an important joint venture between Durham University and Arts Council England.

According to the dedicated website: “It aims to identify ways in which creativity, and specifically creative thinking, can play a larger part in the lives of young people from birth to the age of 25, both within and beyond the current education system.

“Crucially, the Commission hopes to find out what already works well and where there might be gaps that can be addressed.”

Its five-strong steering group includes the Vice-Chancellor, Prof Stuart Corbridge, and Sir Nicolas Serota, chair of Arts Council England (ACE). There are also 17 commissioners, all leading figures in public life, and a research team of 14 which Simon leads.

“At the moment I’m trying to write a document to make all these people really happy,” he says, conveying with a smile that this is no simple task.

Simon, an expert on late Victorian and Edwardian literature, was previously head of English Studies at the university.

His research team colleagues, while predominantly drawn from the School of Education, also include representatives from Psychology, Physics, Music and Engineering.

Simon explains that the timely investigation is around schools and cultural organisations and the ways in which they teach young people to be creative and to think creatively.

Key question: “Is education, in and out of school, delivering that as well as it might be?”

The English Baccalaureate, introduced in 2010, encompasses the handful of GCSE subjects which must be studied because they are believed to open doors to more university degrees. Secondary schools are measured by how well their pupils do in them.

It has been controversial because none of the stipulated five is an arts subject. Music, art, design, drama and dance are all on the decline, says Simon.

But he believes that is an unintended consequence of the way schools are currently being assessed.

“The schools minister would say it’s up to every individual head teacher to make decisions as to whether they want to restrict those subjects or not.”

The school’s minister is Nick Gibb MP who has served under David Cameron and Theresa May and is (at the time of writing) the longest serving minister.

Coincidentally, he is a Durham University graduate and attended the same school as Simon James, Maidstone Grammar, which he once reportedly praised for the “rigour” of its lessons, “even things like music: it was taught in the same way as chemistry”.

“I think he really, really wants schools to be better,” says Simon, “although it’s fair to say that not all people agree on how that should happen.

“Employers are telling us they want young people who are creative, particularly given the nature of work in the next 30 or 40 years with increased automation and artificial intelligence.”

The Commission’s belief that “there is further untapped potential that can be unlocked” is there for all to see on the website, as is its mission to find if creative thinking across all disciplines – arts, sciences, humanities – is sufficiently supported by the current education system.

To this end, the team of researchers has been on the move. Part of the last year Simon has devoted to visiting schools and nurseries known for their outstanding creative teaching. Arts organisations have also been on the extensive itinerary.

If it had been a five-year project, says Simon, they would have been looking at successful schools that don’t boast particularly creative curriculums. Limited time meant focusing on best practice.

He has been “hugely impressed” by much of what he has seen. Schools in Great Yarmouth and Birmingham stand out in his mind, along with others in Plymouth and Bristol.

In the North East he has seen “excellent examples” of creative learning at Excelsior Academy in Newcastle and Durham Sixth Form Centre. He has also visited The Forge, in Stanley, which creates and produces high quality arts projects by and for children.

Simon says the Commission received more than 1,000 responses to a survey about creativity and imagination which was followed by one-to-one interviews and focus group sessions.

“What has come out of it is that being taught to be creative stimulates a child’s imagination but also helps to build confidence.

“The term in the academic literature is self-efficacy. If children exist in a creative realm where they can try things out and reflect and then try again, it gives them such a belief in their own agency and a sense that their decisions matter.

“I visited the most incredible primary school in Durham where the kids are fearless. They haven’t all had the best start in life and some of them are from immigrant or refugee backgrounds but what the school does is phenomenal.

“I think it comes from the school ethos. The head teacher’s number one thing is for the kids to know they are safe and cared for. Everything else follows from that.”

He has heard teachers raise concerns aplenty about the decline of arts and creative subjects but also tales of how they are being resurrected.

“I think I’d throw myself in the Wear if I thought the report would conclude that creativity in schools is dying,” he says dramatically (as befits one who once played Hamlet in a university production).

“We’ve found hundreds of models of good practice so there must be thousands of really good things going on. But we’ve also found they’re not evenly spread.

“If you live on a particular estate in Darlington served by Theatre Hullabaloo, where there’s a dedicated and brilliant team of people looking out for the education of your kids, then you’re fortunate. But other places don’t have that.”

He recalls a “heartening” seminar at Great North Museum: Hancock organised by Create North and focusing on creativity and special education needs.

“There must have been 50 teachers there who had been paid by their schools to go, so that shows there’s an appetite to know about creative education.”

The Durham Commission report will be launched at Westminster in September and followed by an event at Ushaw College for participants and stakeholders.

As for the North East Culture Partnership, Simon says he values the relationship with colleagues at the other universities and wishes he had time to do more.

There are several ways in which Durham seems set apart from the region’s other universities – its collegiate structure, its plethora of listed buildings which include Durham Castle and the fact it has so often been mentioned in the same breath as Oxbridge.

“The thing is,” says Simon, “if you think of yourself as a world class research university, which Durham does, you tend to have your eyes more fixed on the global perspective.

“That’s not to say we don’t do tremendous things locally but often the good that we do comes at the level of individual units within the university.”

Strong in student sport, music and drama, Durham also engages with the wider community through its exhibitions at Palace Green, its public lectures, its botanical gardens and its contributions to Lumiere, the biennial festival of light-based art which is happening again in 2019.

This year’s festival conference has the theme of creativity and Simon is delighted that the Durham Commission will feature prominently (speakers will include poet Kate Clanchy and writer and broadcaster Natalie Haynes).

He and his team will be even more thrilled if the recommendations of the Commission have a bearing on policy and contribute positively to ACE’s strategy for the next decade.

On a sunny day in Durham, there is every reason for optimism.