Interview with Sharon Paterson – The Transformative Power of Culture08 October 2019

Sharon Paterson, Associate Director, Culture and Engagement, MIMA and Teesside University, tells David Whetstone about the role of a civic university and the transformative power of culture 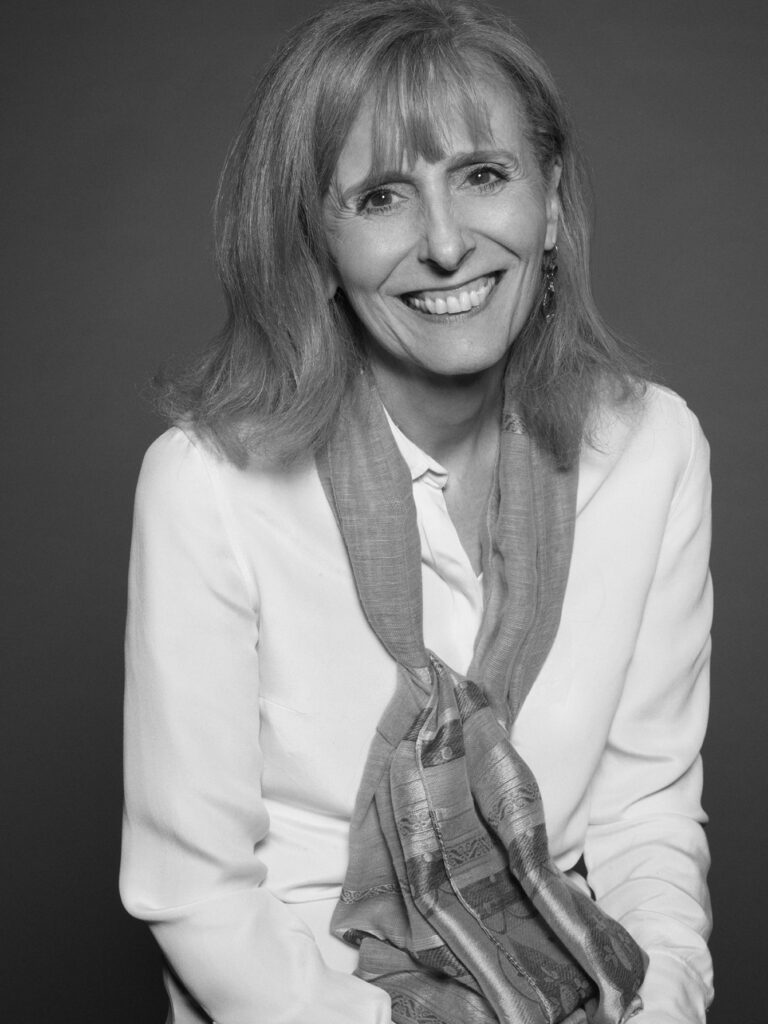 In the days when few people could hope to attend, there was little incentive for universities to seem other than aloof. An air of aloofness hangs over some of them even today.

Not Teesside University, though.

Located in Middlesbrough, it attained university status in 1992 after 23 years as a polytechnic. Its website refers to its “friendly town campus” but friendliness doesn’t preclude ambition. An ongoing £300m campus development is aimed at enhancing the student and learning experience.

In an increasingly competitive market, all universities reach out to students far and wide but this one seems particularly keen to be appreciated by all in its vicinity.

This is certainly the impression I get from Sharon Paterson, Associate Director, Culture and Engagement, MIMA (Middlesbrough Institute of Modern Art) and Teesside University.

We meet not in a book-lined office down a corridor but at MIMA, Middlesbrough’s renowned public art gallery, for the simple reason that as well as being in her job title, this is where she’s based.

A prominent figure on the regional arts scene, Sharon – one-time actor, designer and theatre producer – moved to Teesside from Northumbria University a dozen years ago.

On that website she declares herself “privileged” to be part of an agenda that supports the development of the region’s creative infrastructure and the next generation of artists.

Over coffee, she insists: “The first thing that struck me when I came here from Northumbria was the warmth of the welcome.

“It really was outstanding. But there’s also a tremendous energy and unquenchable spirit here in the Tees Valley. You can feel it. People are encouraged to do things for themselves.”

Middlesbrough was hit hard by the decline of heavy industry but with industry comes innovation and there’s no sign that that’s in short supply, either on campus or locally. Slowly but surely, the narrative is changing.

The town centre has improved visibly since MIMA opened in 2007, a 21st Century landmark overlooking spacious Centre Square with its grass and fountains. 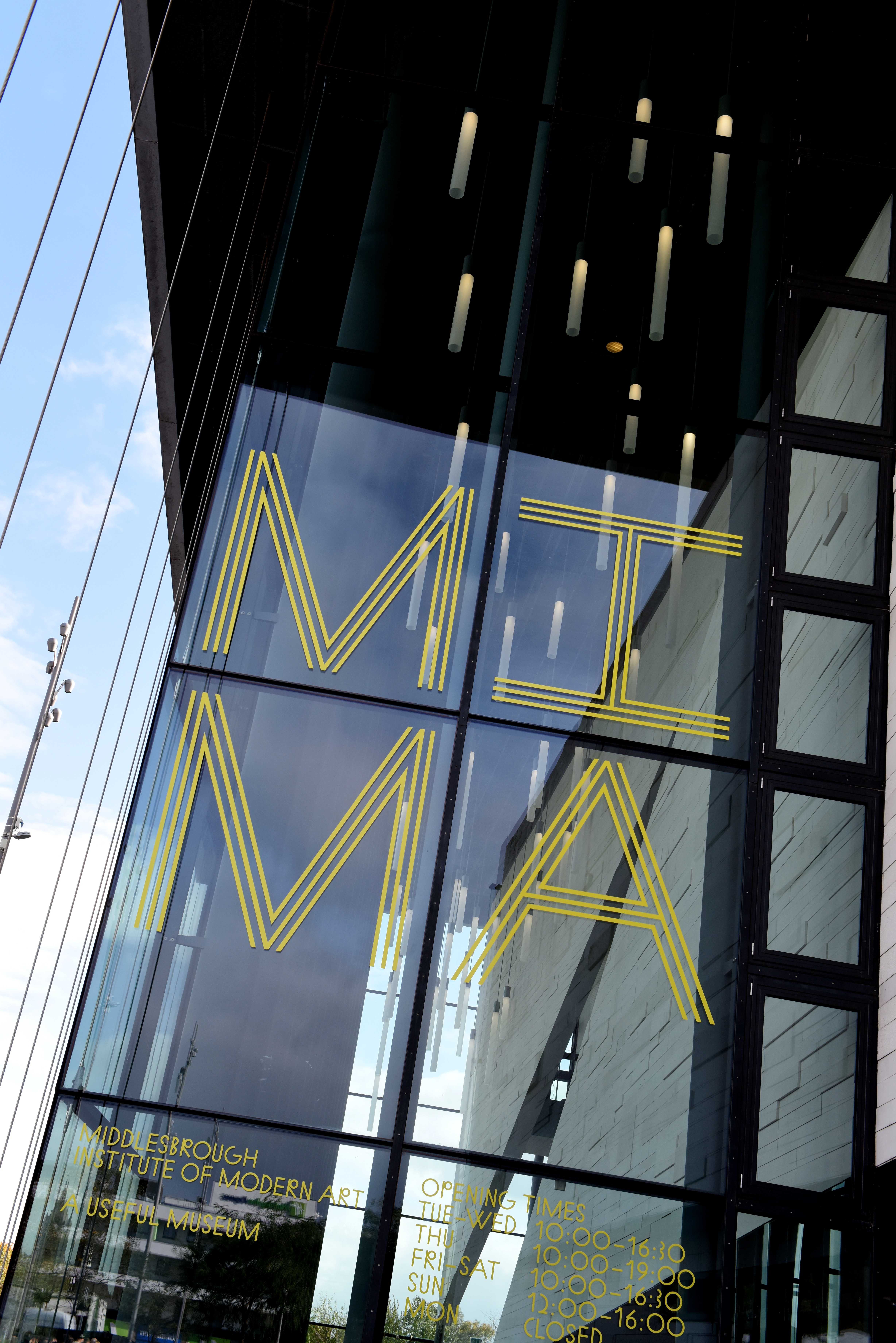 Housed within is the valuable civic art collection which was once scattered across several sites, a light hidden under a bushel if ever there was one.

Opposite is a 19th Century landmark, the impressively refurbished Middlesbrough Town Hall, and nearby is Claes Oldenburg’s sculpture, Bottle of Notes, made in homage to Captain James Cook, born not far away in 1728.

Town and gown seem not so much divided here as in cahoots.

In 2014, when Middlesbrough Council had to slash its budget, MIMA became an asset of the university – hence Sharon’s job title and the fact that Laura Sillars, who became Director of MIMA in 2018, is also now Director of the MIMA School of Art which was launched in May.

For the university’s fine art students, the benefits of this are not hard to fathom. On ‘MIMA Mondays’, when the place is closed to the public, they have exclusive use of it.

“It’s a fantastic project,” enthuses Laura who joins us over the coffee.

“Fine art provision that was already very good has been brought into MIMA so students get first-hand experience of the curatorial, producing and programming skills needed in a working gallery or museum.

“You can’t learn by osmosis but the learning environment shapes how and what you learn. Having experience of MIMA and its staff can help to make students ‘real world’ ready.”

The creation of the MIMA School of Art boosted the gallery’s status, says Laura.

“It is an active research lab and we absolutely engage and integrate into wider communities. That lies at the heart of what we do.” 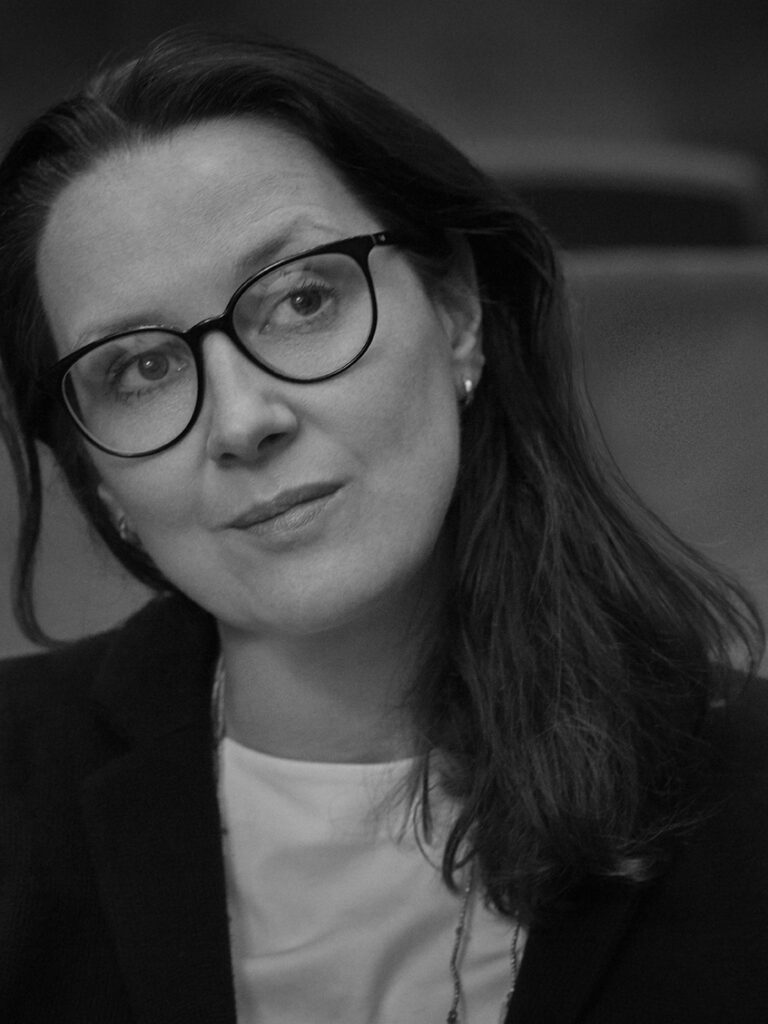 All six schools at the university, she adds, have joined in recruiting a research fellow for a year to look at civic engagement in art and health.

Sharon points out that fine art students aren’t the only intended beneficiaries of MIMA and its School of Art.

“Over the past two or three years there has been a real sense of looking at how we can maximise the benefits across the university.

“A lot of the projects we do are for students from across the piece, from engineering, forensics and early years education to computing and digital technology.

“It’s that integrated approach we’re after. MIMA has a national and international reputation for its work in civic engagement and that is a big part of the university’s identity as a civic institution.”

This year saw publication of an independent report by the Civic University Commission – initiated by the UPP (Universities Partnership Programme) Foundation – which recommended that universities should sign a civic university agreement.

This would be drawn up in partnership with local government and other major institutions in the area and constitute a pledge by a university to make the economy and quality of life in its locality a top priority.

Chris Skidmore, Minister for Universities and Industrial Strategy, welcomed the report and Angela Rayner, Shadow Secretary of State for Education, called it a blueprint to increase the value of universities to their local communities.

One of those quick to commit to the idea was Prof Paul Croney, Vice-Chancellor and Chief Executive of Teesside University (along with, it must be said, his counterparts at Newcastle, Northumbria and Sunderland).

In reference to the Civic University Commission report, Sharon says: “I genuinely think in Tees Valley there’s a real sense of ownership of the university.

“This university is about all the people of the Tees Valley. During the years I’ve been here the campus has been transformed and people value that because they know it’s for the students but also for the town.

“The university is important not just because it’s an employer but because there’s a great deal of pride in it. People want to stay in this area and for us it’s about ensuring they can.

“Here at Teesside we’ve always had a lot of students from the local area and the university has a fantastic history of trying to maximise the opportunities for people to pursue higher education.” 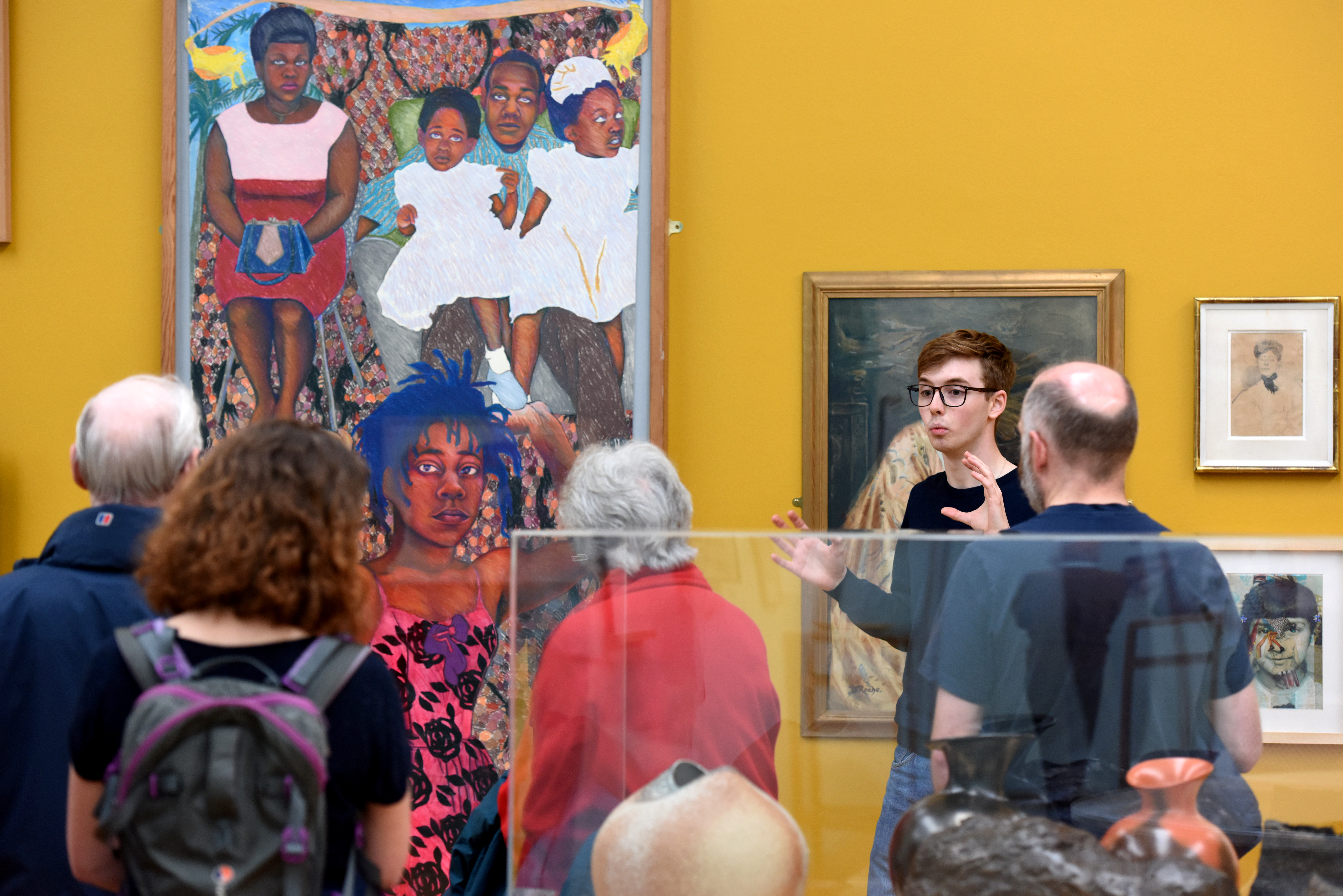 For those from low income backgrounds, the prospect of studying away can be daunting. But Sharon says even those who go elsewhere to study are often drawn back.

“The quality of life available to graduates in the North East is incredible and would be very hard to achieve in some other places.”

I find Sharon and Laura fired up about a bid to Arts Council England’s lottery-funded Creative People and Places programme which targets areas where engagement with the arts is low.

Not exclusively a campus concern, this is a joint bid focused on the boroughs of Middlesbrough and Redcar and Cleveland. Among various local backers is MIMA as the cultural partner.

A film made for the submission features some of the local groups which use the building and are part of what Laura calls the “MIMA family”.

Thursday is MIMA’s Community Day when the likes of the Cloth Club (for people who work with textiles) and community choir congregate. Visitors can share the community lunch and learn about the community garden.

“MIMA is a beautiful gallery with excellent international artists but it wants to be part of the community that surrounds it and open to everybody,” says Laura.

“My analysis of it is that being part of the council made it a civic organisation and we didn’t tend to think about what that meant. Moving over to the university, that civic element could have been lost.

(The Creative People and Places bid was successful, meaning £2m will be available to fund artistic projects over the next four years.) 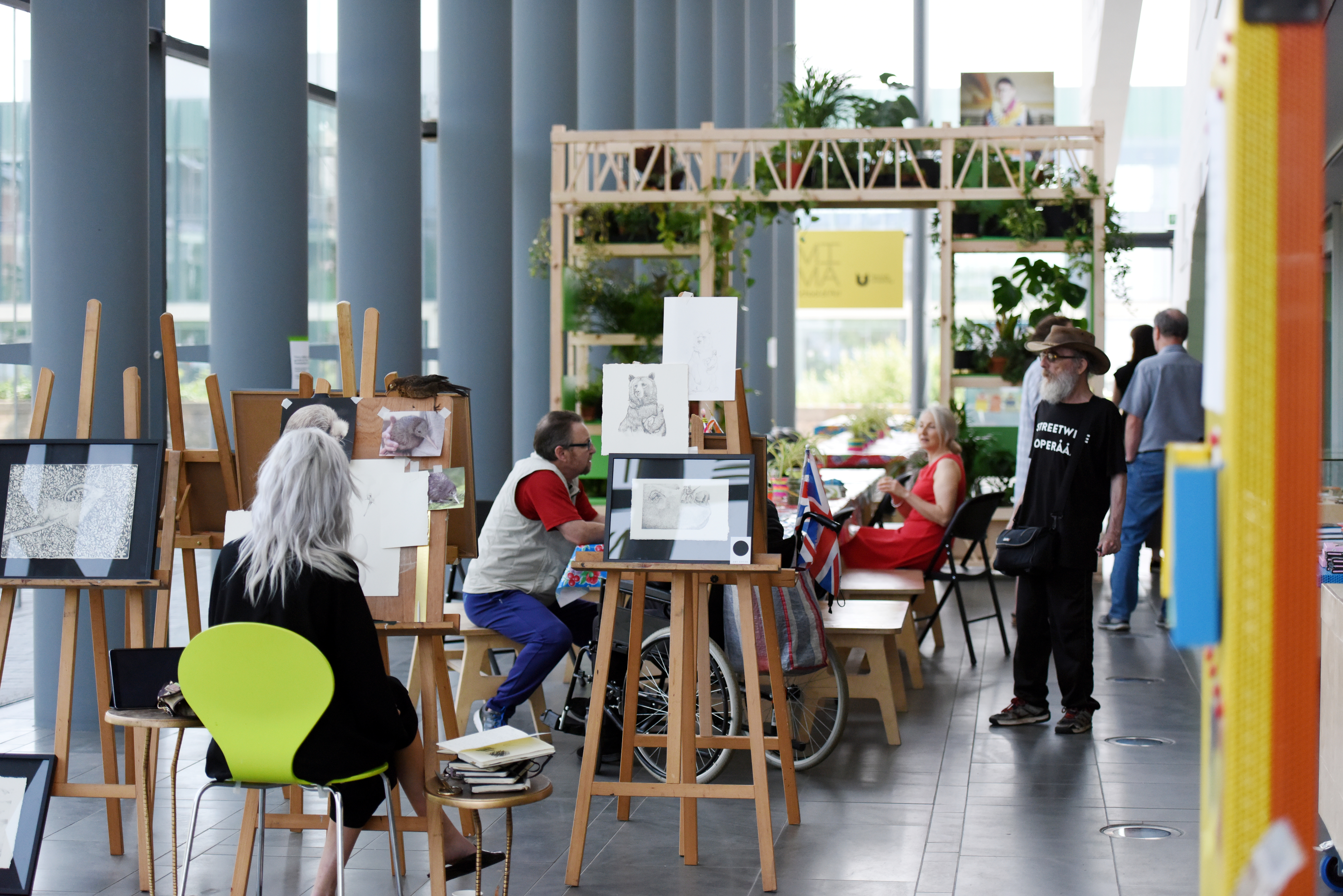 The university is also involved in the Tees Valley bid to be UK City of Culture 2025, building on a cultural portfolio that includes Animex, the international festival of animation and computer games started by Teesside University in 2000, and the Middlesbrough Art Weekender (September 26-29 this year).

As demonstrated in Hull, the title is worth millions in tourism and raised profile, to say nothing of altered perceptions.

But whatever the outcome of the bid, says Sharon, there are guaranteed long-term gains.

“The amount of work that goes into applying means you have to be committed to doing the things you propose in any case. Winning is obviously important but the process is transformative. That’s what excites everyone.”

There is excitement across Tees Valley and a sense of things happening.

Sharon speaks often of partnership and collaboration, of a shared sense of pride and purpose.

Collaboration between the region’s universities has always been very strong in her estimation and continues to be so.

“We reinvent ourselves in terms of different university structures but essentially we all believe passionately in the value of culture and its transformative power.

“By working together we believe we can offer the best possible experience for our young people and future generations.”