David Whetstone was at the North East Culture Partnership Annual Forum: Climate Change and the Cultural Sector, which took place before hundreds of delegates at Sunderland University. This is his report of the day.

A CALL TO ACTION

For anyone wondering, quietly or out loud, why climate change was the theme of this year’s North East Culture Partnership forum, doubts were soon blown away as on a stiff breeze.

Welcoming a large audience, Sir David Bell, Vice Chancellor of Sunderland University, said he’d been in Australia over Christmas. That there was a climate emergency couldn’t have been more evident.

“You can’t help thinking that managing the natural environment is going to be the topical issue not just today but for decades to come,” he said.

One of the advantages of involving the cultural community, he added, was “that you have creative people bringing their ingenuity and imagination to the task”.

John Mowbray, outgoing NECP founding co-chair, had also been on his travels, seeing evidence of melting glaciers in Alaska.

He reminded delegates of the potential clout of the NECP, embracing 12 local authorities, five universities, cultural organisations, artists and businesses.

“At the end of this we need to get a call for action because we can lead,” he said. “The partnership is unique in the country in terms of bringing all these organisations together.”

Ros Rigby, who chairs the NECP’s Case for Culture steering group, called for “some real statements of ambition” to conclude the day but confessed: “A lot of us are finding our way on this issue.”

She then introduced keynote provocateur Anna-Lisa Mills, climate change expert and director of True North Sustainability, who wasted no time in declaring that the time for finding the way is all but spent.

A chartered environmentalist, Anna-Lisa is as knowledgeable as she is passionately committed. A stiff breeze duly morphed into a chill wind.

Having studied the science (telling us 97% of research papers have concluded climate change is happening with the rest linked to the fossil fuel industry), she warned we might get depressed.

To illustrate the scale of the task at hand, she flashed up a map of the shrinking world available to our growing population. Forget much of the southern hemisphere, depicted largely as desert.

To keep it green, scientists have warned that we should limit the global temperature rise to 1.5 degrees Centigrade. Above is the point of no return. But is the warning being heeded?

“If we put everything together,” said Anna-Lisa, “we’re on track to hit 3-4 degrees of warming. That’s treble the level of suffering we see on the news. That’s Plan A at present.”

“Everything we’ve done so far has failed,” said Anna-Lisa. “Nothing has made a difference to rising carbon emissions. We need to do something radical and different.”

Was a solution to be found in this lecture theatre? Anna-Lisa didn’t look wholly convinced.

Her question to the room: “Can the culture sector effectively communicate the climate emergency in order to win hearts and minds and build the scale of momentum required to drive change?”

A gauntlet was thus thrown down.

The task of lifting the gloom fell to four speakers who, in various ways and for various reasons, are doing something.

First up was Paul Irwin-Rhodes, Mr Big Business for the day. External affairs manager at Greggs plc, he got in a plug for the vegan steak bake before explaining what motivates a company with 2,000 UK outlets, £1bn annual sales and 23,000 employees to clean up its act.

Firstly, Greggs was a baker and relied on wheat, he said. Wheat required certain conditions to grow. But that wasn’t the only reason climate change was a key risk to the business.

“We want our business to have a positive impact on people’s lives.

“Because of them, we get customers asking questions. People are looking to purchase from responsible businesses.”

“The medium of comics can be used to talk about anything,” said Bryan.

“The biggest organisations in the world won’t change anybody’s mind. What changes people’s minds is a good story. This is about a young couple falling in love, but it also deals with the environment and catastrophe on a human scale.”

The Talbots call their work “education by stealth”. If you want to learn about the role of blanket bog in regulating the eco-system – or even if you don’t – you’ll absorb the details in their new book.

“We think culture is uniquely positioned to talk about climate change in a way that science can’t and politics won’t… both intellectually and emotionally,” she said.

Echoing the Talbots, she said: “People respond to the power of storytelling.”

Carol Botten, chief executive of VONNE (Voluntary Organisations’ Network North East), explained how an organisation with 12,000 members across the region was playing its part.

It had begun with a visit by Peter Stark, one-time director of Northern Arts and architect of the Case for Capital which in the 1990s secured massive investment in the region’s creative infrastructure (BALTIC and Sage Gateshead were among its fruits).

Now in league with the Mining Institute and focusing on climate change, Peter had argued that as the region where “the genie of coal” was released into the world, the North East had “a unique responsibility to address climate change”.

Carol, who had been inspired, called climate change “the defining issue of our time”.

But she said as well as negative implications there were opportunities for North East people and businesses to become pioneers again, tackling climate change rather than extracting coal.

She outlined plans for a North East Climate Coalition to make the region a leader in green living while helping to replace some of the jobs lost through the closure of mines, steelworks and shipyards. 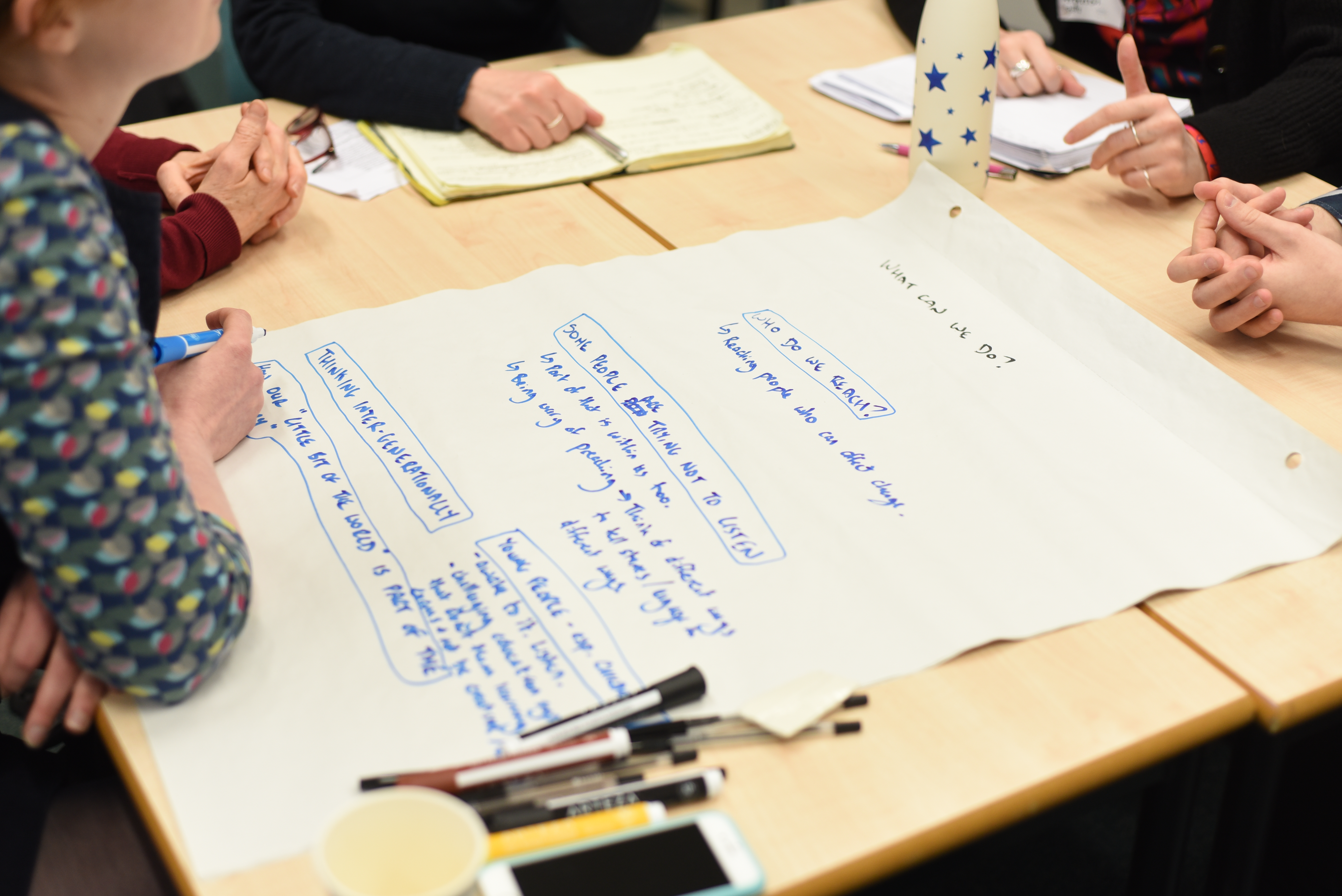 Breakout sessions saw delegates split into three groups to discuss ways in which artists and arts organisations can respond to the climate crisis and to look at collaborations between the arts, heritage and tourism sectors and other bodies.

It was intense. A remark by Julie Sanders, Deputy Vice Chancellor of Newcastle University, captured the mood: “We need to have done it yesterday.”

Carol Botten was up for it: “We have to take the rule book and throw it out of the window because this is urgent. We’ve got eight years to save the world. The importance of this issue has got to drive everybody.”

Artists have been tackling issues like climate change for a long time but as Aidan Moesby would point out in the Question Time session later, artists are often lone voices.

Galleries can amplify their contribution. BALTIC organised a day of activities coinciding with the global climate strike back in September and Mima, as curator Elinor Morgan reminded us, mounted a big exhibition called Fragile Earth, involving 22 artists and a huge public programme.

Someone else remarked: “It must be a science and arts conversation.” Scientists and artists have worked together fruitfully in the past. Perhaps they need to work more closely in future – that being the immediate future.

The vital involvement of schools came up in our group (how many children must have pestered parents into quitting smoking?). Also, the need for openness and for information to be shared.

Carol Bell, of NewcastleGateshead Initiative, led a breakout group to discuss the controversial Festival 2022, derided as the ‘Brexit Festival’ by some but described by its creative director, Martin Green, as a chance to show the strength of the creative sector and its work around climate.

Time was nearly up. Annabel Turpin, who runs Arc in Stockton, was writing down our ideas. Good stuff, she said desperately, but nothing concrete. Where were Ros Rigby’s “real statements of ambition”?

An artistic and impactful rendering of Anna-Lisa Mill’s doomsday warning was suggested and duly scribbled down. It would, of course, need to be ‘done yesterday’ – but look out for commission details in due course.

She suggested the region was well placed to lead on clean energy with electric cars and wind turbines already in production here.

But what was exciting, she said, was that it was young people who had forced climate change up the global agenda.

Helder spoke about a new environmental society whose members had collected plastic bottles from around the campus and created a sculpture, a “400 years star”.

Five minutes in someone’s hand and that was the amount of time those bottles would take to break down.

Growing up in Hull, he recalled a device at The Deep, the city’s aquarium, to illustrate the danger of rising sea levels. “A couple of cranks and Hull was just gone.”

Challenges and Opportunities was the theme. As is the nature of these events, the discussion meandered this way and that.

Jamie Driscoll warned about ‘greenwash’ in business. There was a lot of it about, companies claiming to have done their bit by “switching to a Nissan Leaf”.

“We have to be more radical. The one thing we need to change is the transport system. We need a system that’s concentrated on moving people rather than moving vehicles.”

Aidan Moesby, who supplied one of the standout facts of the day (that moose are getting ticks because it’s too hot), reminded delegates that climate change, like many other things, disproportionately affects vulnerable and marginalised communities.

There was, he suggested, “a connection between external weather and internal, psychological weather”. Climate change can contribute to loneliness and despair.

Iain Watson spoke of how museums – “large old buildings full of stuff” – can be used to tell stories about climate change, just as Dippy the dinosaur had done on his visit to Great North Museum: Hancock.

Francis Runacres agreed that “the human being loves stories and learns through stories”. He suggested those present had the power to open doors and influence others through storytelling. 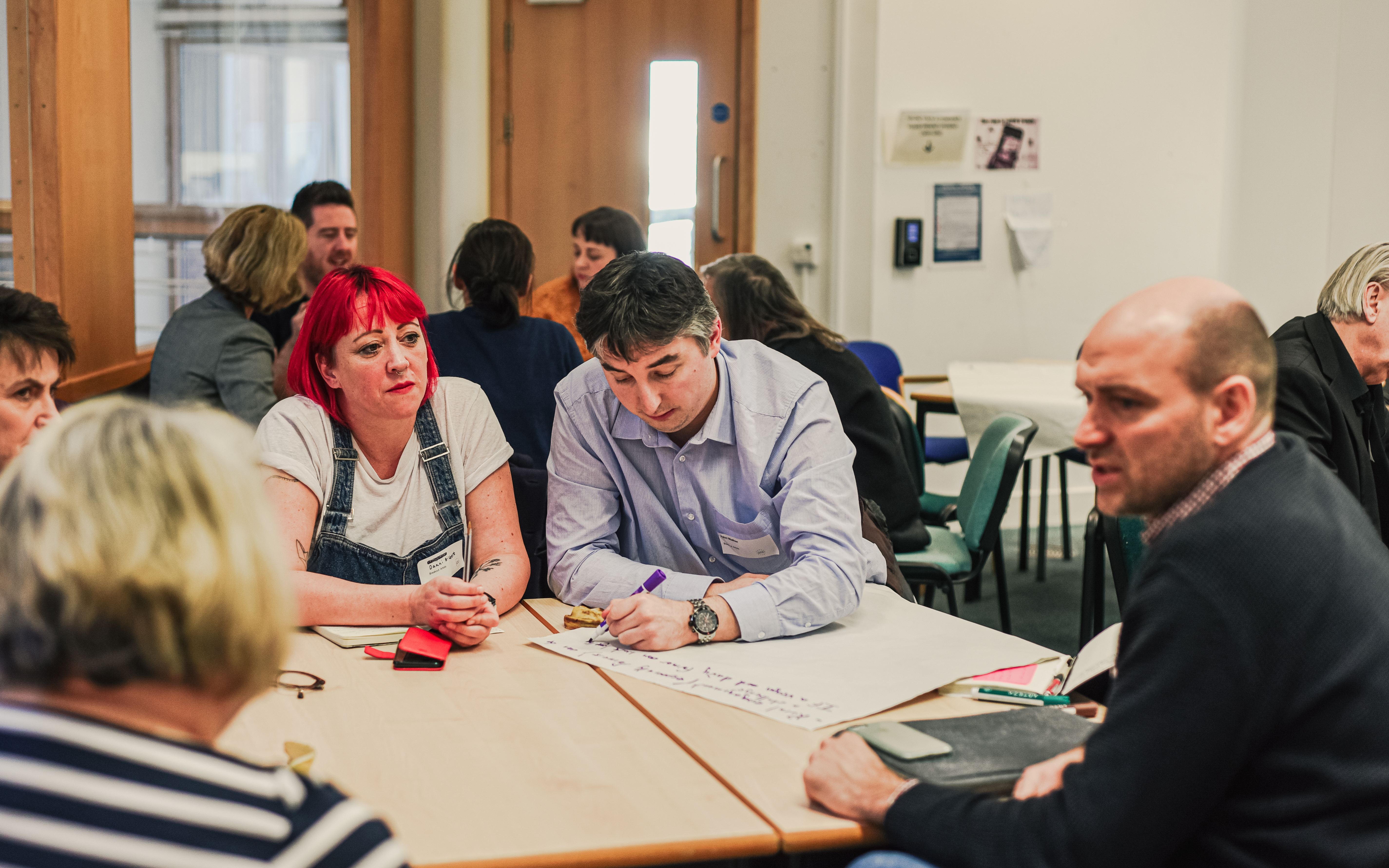 Reflecting on the day, Anna-Lisa Mills seemed slightly cheered by her exposure to NECP delegates.

Won over to the value of storytelling, she even remembered an animated film she had made, likening the climate emergency to the voyage of the Titanic.

She said that to urgent warnings of icebergs from other skippers who had shut down their engines, the captain of the Titanic replied: “Shut up – you’re blocking our signal.”

Said Anna-Lisa: “We have to listen to the scientists. But I’ve picked up that there is hope and a great deal of knowledge in the room.

“There’s a great appetite for change and I feel there’s a will to embrace this idea of a new regional identity around climate change and a role for the cultural sector in that.

“We’re at a tipping point in awareness and understanding, moving the conversation from this being a marginal to a mainstream issue. People are starting to wake up and we need to build on that momentum.”

That iceberg is still some way off but it’s approaching fast.